In the Gstaad Card experience area between Saanenland and Simmental, the following public transport services are included / free of charge during your stay in the 2nd class from 1 June to 31 October. The Gstaad Card cannot be used for arrival and departure.*

Bookable as a payment service with the Gstaad Card

For groups of more than 10 persons, a mandatory seat booking is required on the trains and the coach companies. Please book the seats for your groups as early as possible (at least one day before till 12.00 noon):

* The Junior Travelcard is accepted. The Gstaad Card is not valid for dogs and bicycles/mountain bikes. A normal ticket must be purchased for them. 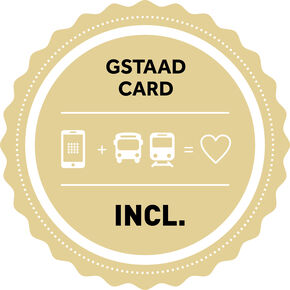